Fourth-tier Saarbrücken hosted Leverkusen for the first semifinal of the DFB Pokal. 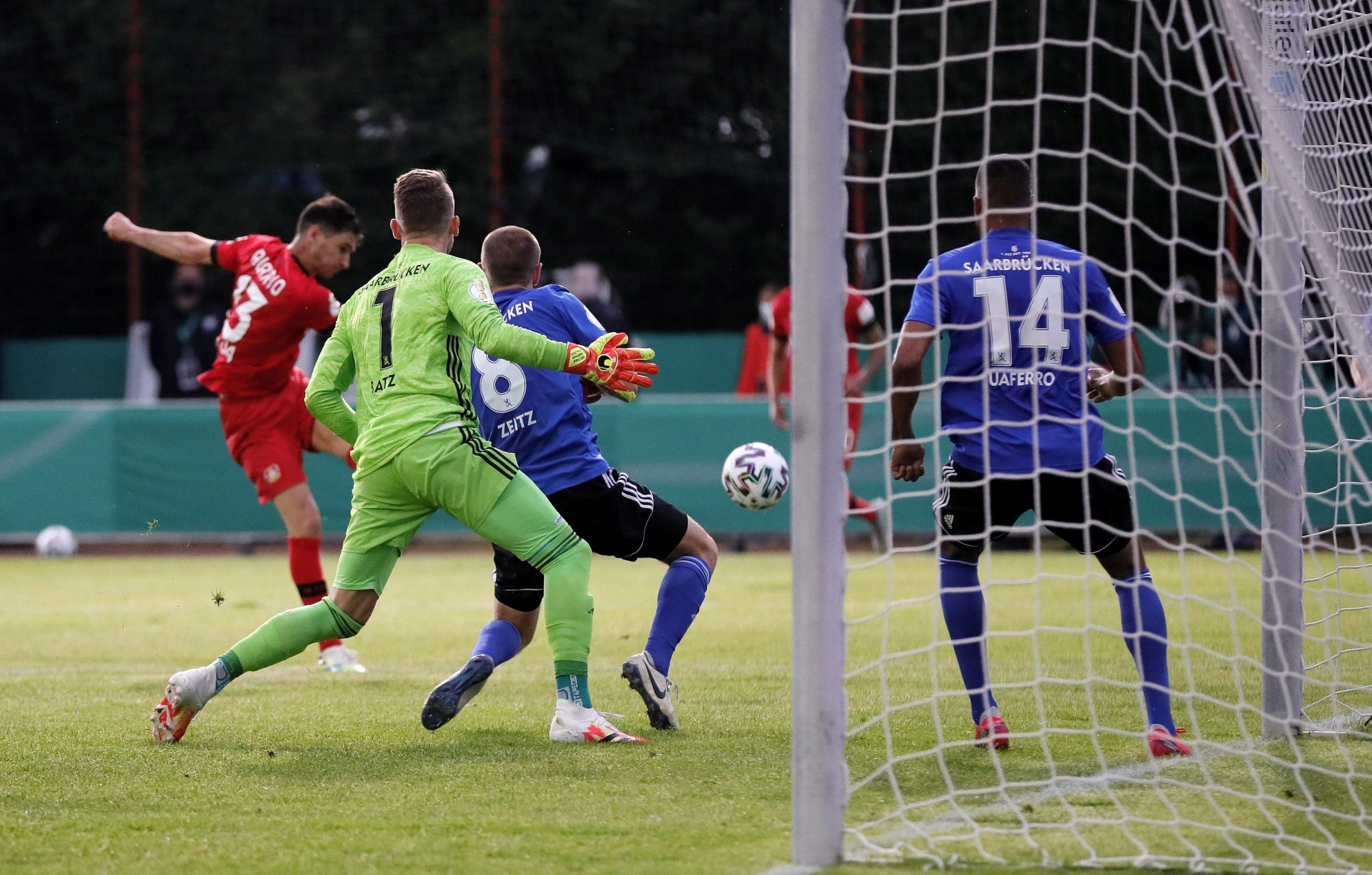 Leverkusen were naturally the better side in the opening exchanges, and they got their first big chance 10 minutes in, when Demirbay dinked a ball over the top for Diaby, who guided it through Batz’s legs with his first touch.

Things went from bad to worse for Saarbrücken, as Batz and Zeitz got mixed up while defending a Demirbay cross, and Alario was around to poach it home.

The second half saw more of the same, and it was 0-3 in the 58th minute, when Demirbay squared it Bellarabi, who smashed it home.

Saarbrücken did well to limit damage thereafter, and so. the semifinal ended 0-3 to Leverkusen.

As they did against Köln and Düsseldorf, Saarbrücken sat very very deep from the start. But about 10 minutes in, they started pushing high as well.

However, after they conceded twice, they went back to sitting deep again.

They came out strong in the second period, but the third goal put their hopes to bed.

Daniel Batz – Made a lot of important saves, but failed to recreate his Fortuna heroics. 7.5.

Anthony Barylla – He was not bad down the left, as he did well to keep Wirtz and Bellarabi in check. 5.75.

Christopher Schorch – Decent in defence, but he made an unfortunate mistake which led to the third. 6.

Boné Uaferro – Good at the back, as he kept Alario quiet for most of the match. 6.5.

Dieter Müller – Tried his best to make things happen down the left, but failed to make much happen. 4.5.

Tobias Jänicke – Couldn’t really do too much to impact the match. 4.

Fanol Përdedaj – Failed to hold out against Diaby on the right. 3.75.

Manuel Zeitz – He was overrun in midfield by Demirbay and Aránguiz, and also made a slight mistake which caused the second goal. 4.

Sebastian Jacob – One of the livelier players for Saarbrücken, but failed to get any results. 6.

Timm Golley – Threatened the Leverkusen defence a couple of times thanks to his pace, but couldn’t do much more than that. 6.25.

Steven Zellner – Tried to make things happen, but couldn’t do too much. 4.5.

Kianz Froese – Had a few involvements after he came on, but couldn’t make things happen. 4.5.

Markus Mendler – Couldn’t do much after he came on. Had a massive chance towards the end but he put it wide. 4.

Jayson Breitenbach – Did decently well to keep Diaby and Volland in check. 6.

Fabian Eisele – Failed to have the same impact as Jacob. 4.5.

Team – Though Die Molschder‘s fairy-tale run has come to an end, they played very well to not get thrashed by Leverkusen. Everything was against them – the absence of the 12th man, a lack of match experience for 94 days, and of course the gulf in quality, but they fought valiantly. 6.75.

Lukáš Hrádecký – Was a spectator for most of the match, but he did his job well. 6.5.

Mitchell Weiser – Strong down the right side. 6.25.

Edmond Tapsoba – Saw the majority of the ball in the first half, as he forayed deep into the opposition half to string passes together. Was strong defensively too. 7.25.

Wendell – Patrolled the left flank, and got into threatening positions too, but failed to deliver a great end-product. 6.75.

Charles Aránguiz – Yet another commanding performance from the Chilean in the middle of the park, as he controlled play in holding midfield. 6.75.

Kerem Demirbay – Brilliant performance from him, as he strung his side’s attacks together from midfield. He saw a lot of the ball, and used it very well too, as he bagged 2 assists. Showed his heading prowess too. 8.

Moussa Diaby – Very lively around the box, as he had a few attempts, and drew a few fouls on the edge of the box. Got a brilliant goal for the opener too. Threatened with his pace down the left flank as well. 7.5.

Paulinho – Had a collection of chances, but he failed to make any of them count. 5.75.

Florian Wirtz – Was lively early on, as he created a couple of chances, but failed to turn up in front of goal. 6.

Lucas Alario – Didn’t have too much work, but he scored thanks to his poacher’s instinct. 6.25.

Karim Bellarabi – Scored a good goal after coming on, and worked well in midfield. Not great to see him pick up a knock, though. 6.5.

Jonathan Tah – Was very strong defensively, and good on the ball too. 7.

Aleksandar Dragovic – Solid at the back after coming on. 6.75.

Kevin Volland – Failed to have an impact after he came on, but mainly because his side were not pushing. 5.

Team – It was not an insanely overpowering display from Leverkusen, but they did well to pounce on Saarbrücken’s errors and make their chances count. They were strong defensively too, as they prevented the hosts from having any clear sight of goal. Die Werkself will now face either Frankfurt or Bayern in their first DFB Pokal final since 2009. 7.5.

Guido Winkmann didn’t have too many troubles in his job, and had a good day at the office. 7.25.

Saarbrücken’s Cup Run – They had already created history by becoming the first fourth-tier side to reach the semifinals of the DFB Pokal. They had the odds against them today, as the gulf in quality was magnified by the lack of fans and lack of matches for them. But, they did well to hold out in their first competitive fixture in 94 days. In fact, they even looked better than some Bundesliga sides against Leverkusen. This cup run was certainly nothing short of magical, and will not be forgotten soon.