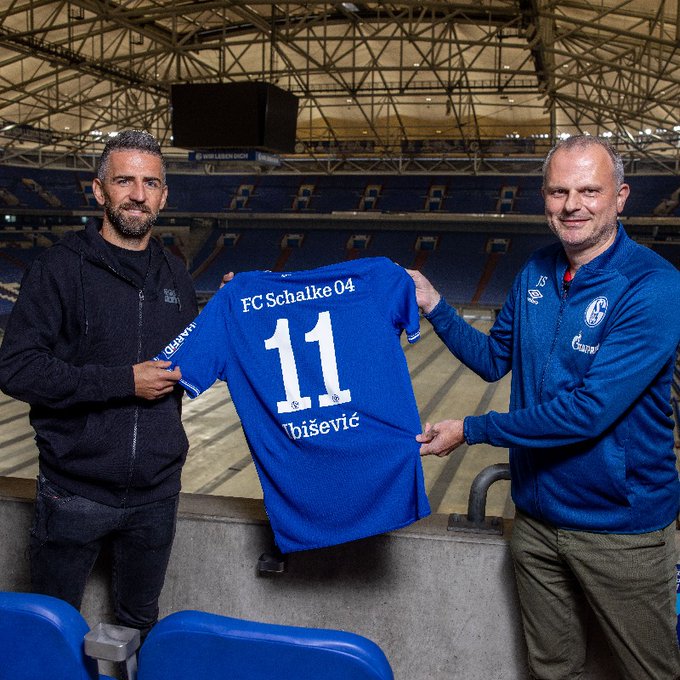 Schalke have announced the signing of Vedad Ibišević on a free transfer after he was released by Hertha Berlin when his contract expired at the end of the 2019/20 season. The striker has penned a one-year deal with the Royal Blues.

The 36 year-old was born in a part of Yugoslavia which is now in Bosnia and Herzegovina. His family fled the country during the Bosnian war. First, they moved to Switzerland where he played in FC Baden’s youth setup, but in 10 months time they shifted again, this time across the Atlantic and to St. Louis in the United States. After playing for a couple of local clubs, he was handed his senior debut by St. Louis Strikers. He moved to Chicago Fire Premier in 2004, and it was during a training session there that Paris Saint-Germain’s head coach spotted him.

The striker didn’t get too much game time for the Parisians though, and was quickly loaned out to Dijon. In 2006, he entered Germany with Alemannia Aachen. A year later, Hoffenheim signed him. He spent five years with the club before moving to Stuttgart, who eventually loaned him out to Hertha Berlin in 2015. The deal was made permanent at the end of the 2015/16 season, and he’s been at the German capital ever since.

Now, at 36, he has made the move to Gelsenkirchen with Schalke. It’s no secret that the Royal Blues have been deprived of goals, especially in 2020, so his main task will be to spice up their frontline. Let’s take a look at his abilities, and if he can do that…

Even though he is 36 years of age, Vedad Ibišević is a proper hard-working forward. He leads his side’s press from the front, and works very hard off the ball even when his side are not in possession. He is a right-footed striker.

First of all, Ibišević’s most relevant strength will be his experience. The Bosnian striker has been playing at the senior level for over 17 years now, so he knows a thing or two about the game. He’s no stranger to German football either having spent 14 years in the country. In the Bundesliga alone, he has accumulated nearly 23,000 minutes of playing time.

In last season’s Bundesliga, he covered a 117.1 metres per minute on average, clearly showing his intensive work-rate. He likes to drop deep and help in the buildup too – averaging nearly 0.9 key passes and as many long balls per 90.

His best skill though is probably his finishing. The striker only got nine goals in the last campaign, but he certainly took his chances with a shot conversion rate of 25%.

Each of his Bundesliga goals in the last season came from within the confines of the 18-yard box. Making this possible are his cunning movements which help him find and exploit the tiniest of gaps, as Köln found out when he came off the bench to bag a brace in a 0-4 victory.

About 45 seconds after coming on off the bench, Ibišević is fully switched on and moves into a triangle of space between three defenders.

Then, it’s a simple tap-in for the striker to score his first of the night. But that was not all…

He gave Sebastian Bornauw yet more nightmares by slightly backing off to move behind him before quickly getting goal-side of the defender to move into space.

The job was only half-done, however, because he had to deal with a fizzing cross from a tight angle. The skilful striker guides it into the near post with his left foot, bagging a second-half brace.

Sharp movement and clinical finishing is all a part of Ibišević’s game.

Although Ibišević is fit and hasn’t been injured too often despite his relatively old age, his pace, which was never too electrifying, has undoubtedly suffered. That should explain his tendency to get caught offside too often – 0.9 times per 90.

The Bosnian isn’t the best at dribbling and holding on to the ball either, as he averages 0.4 dribbles per 90 while getting dispossessed 1.6 times and miscontrolling 2.1 times.

However, these weaknesses aren’t too glaring for a forward, so they shouldn’t be overly problematic.

Despite averaging 11.3 shots per game on average, Schalke only scored 38 goals in 34 Bundesliga outings. Their top-scorer, midfielder Suat Serdar netted seven times and was out for a good chuck of the season due to an injury.

Up front, they experimented with not one, not two, but nine players. The auditions for the role of striker saw Benito Raman, Guido Burgstaller, Michael Gregoritsch, Rabbi Matondo, Mark Uth, Ahmed Kutucu, Nassim Boujellab, Fabian Reese and Amine Harit have a crack, but none of them delivered satisfactory performances.

David Wagner knows that he will need a clinical striker to end their 17-game long winless streak in the Bundesliga, and he will hope to count on the experience and know-how of Vedad Ibišević, Hertha’s former club-captain to help him do just that.

The striker has only been signed on a one-season contract, clearly indicating that he’s seen as a temporary fix while the Royal Blues work on a long-term solution to their goal-scoring issues. Perhaps he will be able to help develop some of the younger players like Kutucu, Matondo, Boujellab and Reese.

There’s not much to lose except salaries for a club when they sign a player on a free, so financially this transfer is sound. More than just that, Ibišević is one of the most well-respected non-German players who are currently plying their trade in the Bundesliga, so that should help their attacking players in particular.

Whether he will succeed on the pitch, only time can tell.

Sandro Wagner announces surprise retirement at the age of 32
Scout Report: Can Patrik Schick Lead the Line for Leverkusen?