Bayer Leverkusen faced Bayern Munich for the final of the DFB Pokal in Berlin. Leverkusen were looking for their first major trophy after the turn of the century, but Bayern had other ideas, as they wanted to win a second-consecutive Domestic Double. 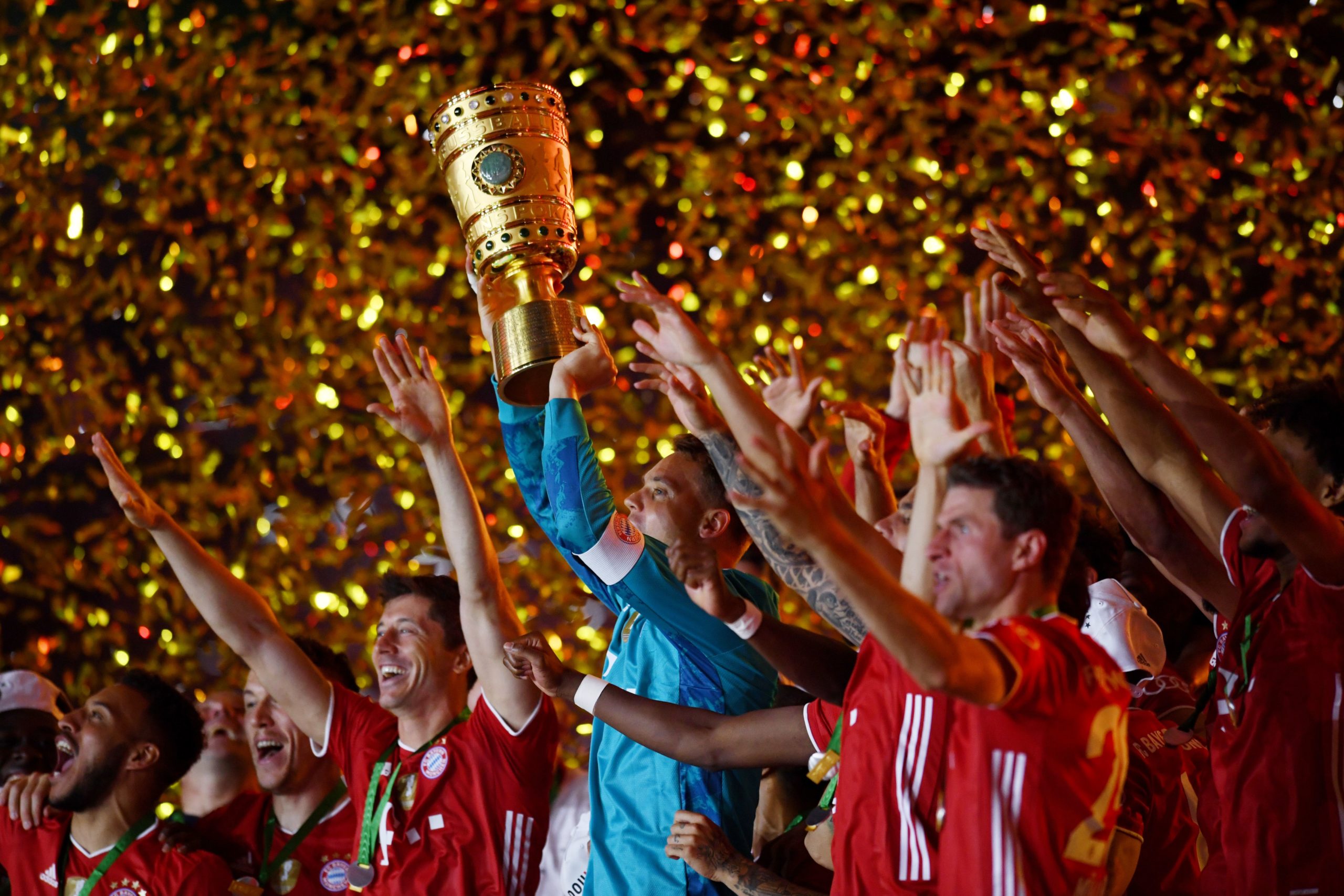 Bayern looked good in the opening exchanges, and Coman had a chance in the 10th minute when he faced Hrádecký from the edge of the box, but his shot went straight into the hands of the Finn.

Lewandowski won a free-kick on the edge of the box in the 15th minute. Alaba stepped up, and curled it into the top corner.

Bayern almost doubled their lead in the 21st minute when Gnabry half-volley hit the feet of Müller, who drew a save out of Hrádecký.

But only three minutes later, Kimmich slipped a through ball to Gnabry, who slotted it home this time.

Leverkusen had a huge chance in the 31st minute when Diaby found Bailey with a ball across the box, but the Jamaican skied it.

Lewandowski had a big chance in the 54th minute when he was found at the edge of the box with a cut back, but he skied it.

Three minutes later at the other end, Diaby found Volland all alone with a all across the box, but the German’s kick only found the air.

Another minutes later, Neuer decided to take matters into his own hands. He smashed a ball over the top for Lewandowski, whose half-volley was straight at Hrádecký, who made an absolute howler as he somehow let it in.

They almost got a second three minutes later when Diaby’s teasing cross narrowly evaded Volland and Havertz, each of whom had a simple tap-in if they got on the end of it.

Lewandowski had a major chance in the 74th minute when Perišić found him with a ball across the box, but the Pole somehow put it wide.

He didn’t miss in the 89th minute though, when Perišić squared a simple pass to him, and he chipped it over the keeper.

Leverkusen thought that they had scored in the 93rd minute, when Volland found the net from six yards-out, but it was ruled out for offside.

However, VAR found that the ball touched Davies’ hand in the build-up, and Leverkusen got a penalty. Havertz stepped up, and scored with the last kick of the game.

So, an enticing affair ended 2-4 to Bayern.

Unlike the recent Bundesliga encounter, Leverkusen were slightly conservative going forward. They tried counterattacking, and didn’t throw the kitchen sink at it – making sure that they had people defending in case Bayern broke away. Off the ball, they tried to employ a midfield press, as they changed to a 4-4-2.

Lukáš Hrádecký – Not a great day for him, because he conceded 4, and made a really poor mistake. 3.75

Lars Bender – Tried his best to keep Coman in check, and created a chance or two up front too. 6.75

Sven Bender – Looked solid at the back, and scored a very good goal too. 7.25

Edmond Tapsoba – Did alright in defence, but failed to stop Lewandowski. 5.75

Wendell – Decent down the left, but he lost Gnabry fairly often. 6

Charles Aránguiz – Battled hard in midfield, but was overrun by Bayern eventually. 6

Julian Baumgartlinger – Looked out of place in the midfield, as he couldn’t do anything to stop Bayern. 3.5

Moussa Diaby – By far Leverkusen’s best attacker, as he caused quite a few problems with his pace and created some glorious chances, but none of them were taken. A lot of his crosses were poor, though. 6.25

Nadiem Amiri – Didn’t manage to settle into the game. 4.5

Leon Bailey – Looked decent down the left, as he troubled Pavard one or two times. Had a couple of massive chances, but his finishing was poor. 5.75

Kai Havertz – Didn’t have too much to work with for most of the match, but he took his chance from the spot. 6.5

Kevin Volland – Had numerous chances, but his finishing and ball control were really poor. 2.5

Kerem Demirbay – Looked alright in midfield as he created a couple of chances, and got an assist as well. 6

Team – Leverkusen did not look out of place against Bayern, but their finishing was really poor. They defended well for most of the match, but a few mistakes let Bayern in. On another day, they could have won if they took their chances, but then again, they are not called ‘Neverkusen’ for nothing. 5.75

Manuel Neuer – Didn’t do anything wrong, and got an assist as well. 7

Benjamin Pavard – Strong at the back, but he let Bailey go at times. Didn’t get forward either. 6.5

Jérôme Boateng – Solid in defence, as he made a few crucial interventions. 6.75

David Alaba – Kept things clean at the back, and scored a cracker for good measure. 7.5

Alphonso Davies – Didn’t get forward as much as he would have liked, and was troubled by Diaby at times. 6.5

Joshua Kimmich – Brilliant in midfield, as he dominated proceedings there. His distribution was on-point too, and he got an assist for the second. 8.25

Leon Goretzka – Supported Kimmich very well in the middle of the park. 7.25

Serge Gnabry – Looked good down the right, as he got into threatening positions, and netted once. 7

Thomas Müller – Worked hard up ahead, and created quite a few good chances. 6.5

Kingsley Coman – Created a couple of chances and threatened with his pace, but his finishing was sub-par. 6.25

Robert Lewandowski – Although he missed a few chances early on, he managed to bag a brace – getting up to 51 goals for the season. If he doesn’t win the Ballon d’Or, I will lose it. 7.25

Ivan Perišić – Looked very good after he came on, as he created a host of good chances, and got an assist for Bayern’s fourth. 7

Team – Once again, Bayern were utterly dominant for most of the match. It is a bit cynical to criticise them, but if their finishing was better, they could have had 6 or 7. Their defending was great though, and they were slightly unlucky to concede twice. A great all-round performance to cap off a domestic double. 7.25

Tobias Welz got all his calls right, and he’ll be very happy with his work. 9

Thiago Alcântara – If reports are to be believed, his brief appearance might have been his last for Bayern.