Mainz Defeat Dortmund to Give Their Survival Hopes a Miraculous Boost

Dortmund hosted Mainz at the Signal Iduna Park for a crucial match for the visitors. Dortmund had already lost the title to Bayern and secured a Champions League spot, so they had little to play for. However, Mainz had their Bundesliga status on the line, and needed a win. 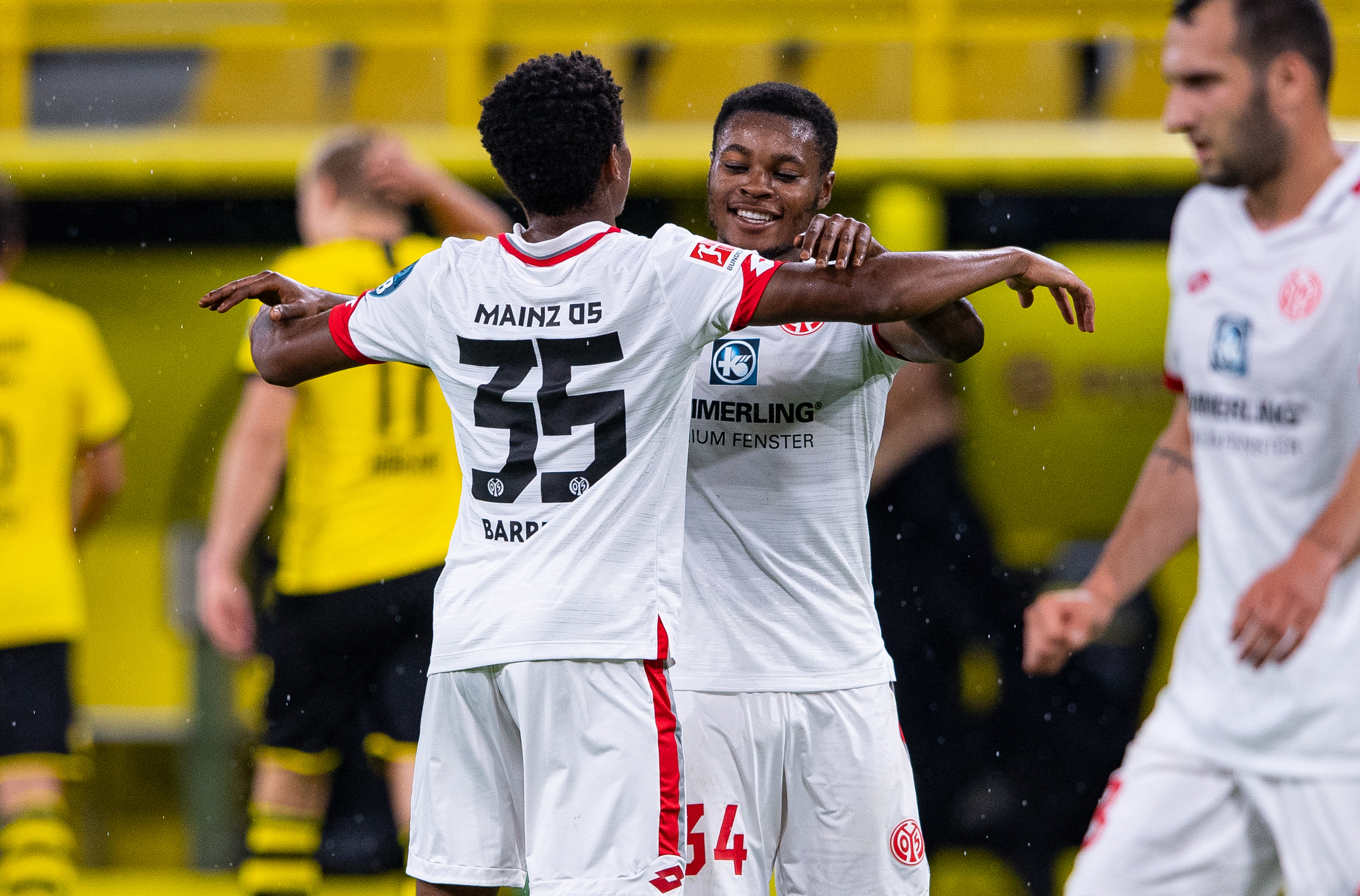 Neither side had a big chance until the 33rd minute, when Baku found Burkardt with a cross, which the 19 year-old headed home.

Dortmund almost responded immediately, when a corner bounced around in the Mainz box, and gave Can a headed chance from 3 yards out, but the Turkish defender was stretching backwards, and failed to generate any power on the header.

A couple of minutes after the break, Onisiwo stung Bürki’s gloves with an effort from outside the box. Latza got to the rebound first, but Piszczek hacked him down, and a penalty was awarded.

Mateta stepped up, sent Bürki the wrong way, and doubled his side’s advantage.

At the hour mark, Brandt tried to find the net from the edge of the box, but he missed narrowly wide.

10 minutes later, Boëtius had a massive chance after he was found with a cut-back, but he somehow missed the target.

On the opposite end, Dortmund won a free-kick which Hakimi took, but he only managed to draw a flying save out of Müller.

Nothing much happened thereafter, and so, it ended 0-2 to Mainz

Dortmund dominated possession as usual, and they also fashioned quite a few sights of goal, but none of them were overly threatening.

Mainz were forced to work hard without the ball, and they did well as they pressed with good intensity. They looked to block the midfield as well, depriving Dortmund’s play-makers of any chances to create some magic.

Burkardt vs Can – The youngster seemed dominated by the Turkish defender early on, but he grew into the game, and started causing major headaches for the Dortmund defence. He then got a goal, and drew a frustrated tackle out of Can which earned him a yellow card. Thereafter, Can was sent to the opposite side of the pitch so that he wouldn’t receive another card. A big win for the 19 year-old.

Roman Bürki – Made one or two good saves, but couldn’t stop the goals. 5.75

Łukasz Piszczek – Looked rather shaky at the back. Saw little of the ball, and conceded the penalty as well. 5

Mats Hummels – Looked like the best of the Dortmund defenders, but not too great either. 6.25

Emre Can – Didn’t look too great in defence, and was tormented by Burkardt. Strong in the air though. 5.75

Achraf Hakimi – Had a few crossing chances, but his end-product was always too deep. Tried a couple of good shots too, but failed to score. 6.25

Julian Brandt – Decent in midfield as he tried a couple of long-shots, but failed to have a major impact. 6

Axel Witsel – Looked alright in midfield, but his passing was surprisingly sub-par. 5.75

Raphaël Guerreiro – Created a couple of chances down the left side, but couldn’t trouble Müller. 6

Jadon Sancho – Saw a good amount of the ball and created a few chances, but failed to make anything substantial happen. 5.5

Erling Braut Håland – Wait, was he on the pitch? It seemed that he was still out injured, because he had absolutely zero impact on the match. 3

Thorgan Hazard – Saw a bit of the ball, but he didn’t create any good chances. 4.5

Marcel Schmelzer – Decent at the back after he came on. 6.25

Team – Dortmund looked good early on, but failed to threaten Müller in Mainz’s goal. After conceding twice, it seemed as if they were the side fighting against relegation, because they completely ran out of ideas. They really lacked motivation after losing out in the title race, and made a lot of mistakes as they mistimed runs and misplaced passes. They have a lot to improve on. 5.5

Nicolai Müller – Didn’t have too much to worry about, but he made one or two major saves. 6.5

Bote Baku – Great down the right, and found Burkardt with a great cross for the opener. Extremely strong in defence too, as he made a lot of clearances and tackles. 7.5

Jerry St. Juste – Solid at the back, and looked great on the ball too. 7

Aarón Martín – Failed to do too much in attack, but was great in containing Hakimi. 6.5

Pierre Kunde – Didn’t see too much of the ball in midfield, but supported his defence well. 5.75

Danny Latza – Worked very hard in midfield, as he supported his side well and created a few chances. Won the penalty as well. 6.75

Jonathan Burkardt – Got his first Bundesliga goal at a crucial time – one which may save his side from relegation. Caused a lot of problems for Can as well. 7

Karim Onisiwo – Was industrious up front, as he created a few chances and gave Bürki a thing or two to worry about. 6.5

Levin Öztunalı – Failed to do too much after coming on. 4.5

Team – Mainz stepped their game up a notch at the crucial time, as they beat Dortmund convincingly to get within touching-distance of safety. They absorbed the pressure from BVB in the first half, and after breaking through twice, they did not let off, and came very close to a third. A thoroughly deserved win after a brilliant performance from Die Nullfünfer. 7.25

Frank Willenborg had an easy first half, but Dortmund started getting very frustrated towards the end, making him a very busy man. He ended up handing out 9 cards, but all of them were deserved. 7.5

Dortmund stay 2nd, and are only 3 points clear of Leipzig, who are their next opponents.

Mainz also don’t change their spot, but they are 5 points clear of Fortuna now, and could secure survival in the match against Bremen on Saturday.