Lacklustre Leverkusen Settle for a Draw Against Surprising Schalke

Schalke welcomed Leverkusen at the Veltins Arena, looking to end their 12-match winless streak. The visitors needed at least a point to go above Gladbach and into a Champions League spot. 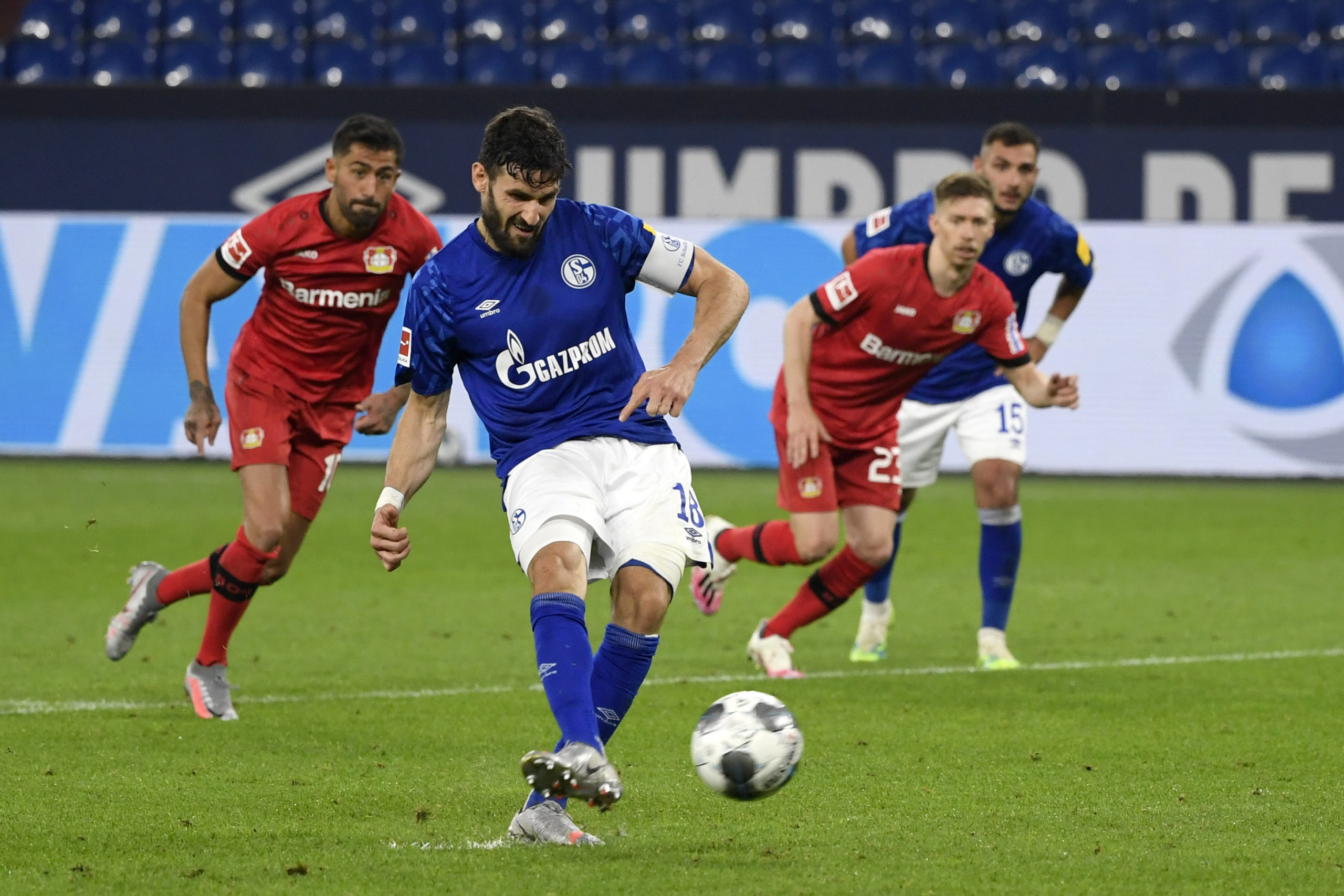 Schalke had a decent chance in the second minute, when McKennie’s stinging shot was parried by Hrádecký to Kutucu, but the Turkish international failed to put it on target from 8 yards out because he was on the way down.

Hrádecký’s gloves were tested again, when Caligiuri thumped one straight at him. He kept it out, and so, it was scoreless at the break.

Schalke were better at the start of the second period too, and they won a penalty (rather luckily) when Tapsoba was adjudged to have handled the ball in the box. Caligiuri smashed it straight down the middle.

After Bodzogan went down, Alario looked to greedily snap up after the ball was played back to Schalke. Tempers flared thereafter, and the referee decided to give out yellow cards to pretty much everyone he could think of.

In the 82nd minute, Wendell nicked the ball off Caligiuri, and squared it for Paulinho, but it was turned it by Miranda for an own goal.

There was one last chance for Schalke in the 96th minute, but Hrádecký kept Gregoritsch’s header out with a great stop.

So, Schalke had to settle for yet another draw – 1-1 with Leverkusen.

Schalke set out determined to prevent Leverkusen from overrunning them, and they were better for the first half-hour, as they pinned Leverkusen in their own half.

During this period, Leverkusen looked to counter, but after that, they built from the back.

It was a very cagey affair, as both sides pressed hard in midfield, leaving the strikers with very little to do.

Leverkusen threw the kitchen sink after going behind, and kept the pressure on after scoring.

Alexander Nübel – Not needed in the first half, but he made a few important saves in the second. 6

Jonjoe Kenny – Good down the right, as he contained Diaby for most of the match. 6.25

Ozan Kabak – Solid at the back, especially in the air. Made a few crucial challenges and blocks too. 7

Juan Miranda – Made a lot of attacking runs on the left side, and he helped out defensively too. Can’t be blamed for the own goal. 6.5

Weston McKennie – Battled tenaciously in midfield, as he made a lot of runs and recoveries. 7.25

Daniel Caligiuri – Much better than his previous outings, as he threatened the Leverkusen goal a couple of times. His penalty was rather risky as he put it down the middle, but it’s the result that matters, and he got the goal. His decision-making was poor at times though, as he was slightly selfish. Undid his good work by making a mistake which led to the equaliser. 6

Nassim Boujellab – Worked hard up front, but failed to do too much. 5.5

Can Bozdogan – Looked very lively early on, and was confident on the ball. Failed to do much in the second half though. 5.75

Alessandro Schöpf – Very industrious in midfield, but failed to have a pronounced impact at the sharp end. 6.25

Ahmed Kutucu – Rather loose when he had the ball, and failed to do too much. Missed his early chance as well. 4.5

Michael Gregoritsch – Made a few threatening runs, but didn’t see too much of the ball. Had one big chance in the last minute but was denied by a big save. 5.75

Team – Schalke were extremely determined from the first minute, and they really wanted the points. Although they didn’t threaten the Leverkusen goal too often, the Royal Blues got a slightly lucky lead through a penalty, and defended resolutely thereafter but couldn’t hold out. They maintained a great work-rate though. 6.75

Lukáš Hrádecký – Made a couple of good saves, but didn’t have too much to do except the mega-save he made with the last touch of the match to keep things level. 6.5

Mitchell Weiser – Went forward very often, and his crosses were good too. 6.5

Sven Bender – Made a few important blocks and interceptions, as he was strong at the back. 6.75

Edmond Tapsoba – Maybe the referee’s call was wrong, but he should have done better to prevent the penalty, as his hand was in a pretty abnormal spot. Good in defence though. 6.25

Wendell – Decent down the left, and good up front too. Got a great assist for the equaliser. 7

Charles Aránguiz – Good in the centre, as he strung his side’s attacks together. Screened his back-line well too. 6.75

Kerem Demirbay – Kept rather quiet in the middle of the park, as he failed to impact the game on either end. 5.75

Nadiem Amiri – Decent in midfield and he threatened Nübel’s goal a couple of times. 6.5

Kai Havertz – Great to see him back. He drove his side forward in attack, and created a few good chances. However, he failed to turn up in front of goal. 6.25

Moussa Diaby – Rather quiet in the match, as he failed to have an impact. 4.25

Lucas Alario – Had a couple of chances, but failed to take them. The unfair play saga did not look good on him., and his was rather selfish at times. 4.5

Paulinho – Did well to force Miranda to put the own goal in, but he failed to do too much. His crosses were probably meant for ghosts. 5

Daley Sinkgraven – Good on the left side, but he couldn’t create any chances. 5.5

Kevin Volland – Had no chances, and therefore no impact. 4.5

Team – Leverkusen didn’t look like they were expecting Schalke to be so passionate, but they did well to absorb the pressure and grow into the game. Die Werkself conceded a rather unfortunate penalty, but showed great character to get back level. 6.5

Daniel Siebert had an easy first half, but things started getting harder in the second. The penalty he gave was rather harsh, and in my opinion, the wrong decision, as Tapsoba’s hand was seemingly pushed towards the ball by Miranda. After the unfair play from Alario, he decided to dish yellow cards out like his wedding invitations. If you are a yellow card-spotter, you’d love this man’s performance. 6.25

Schalke move two places up and go 9th, and are 4 points away from European football. However, their winless run is now 13 games long.

Leverkusen also move up – to 4th place as they jump over Gladbach. They have a one-point buffer to them, and are 5 away from Leipzig who are 3rd.