Fortuna welcomed runners-up Dortmund to the Merkur Spiel-Arena, desperately looking for points to get out of the relegation play-off spot. They were sporting a special kit to celebrate the club’s 125th year, and hoping that it would bring them some much-needed luck. 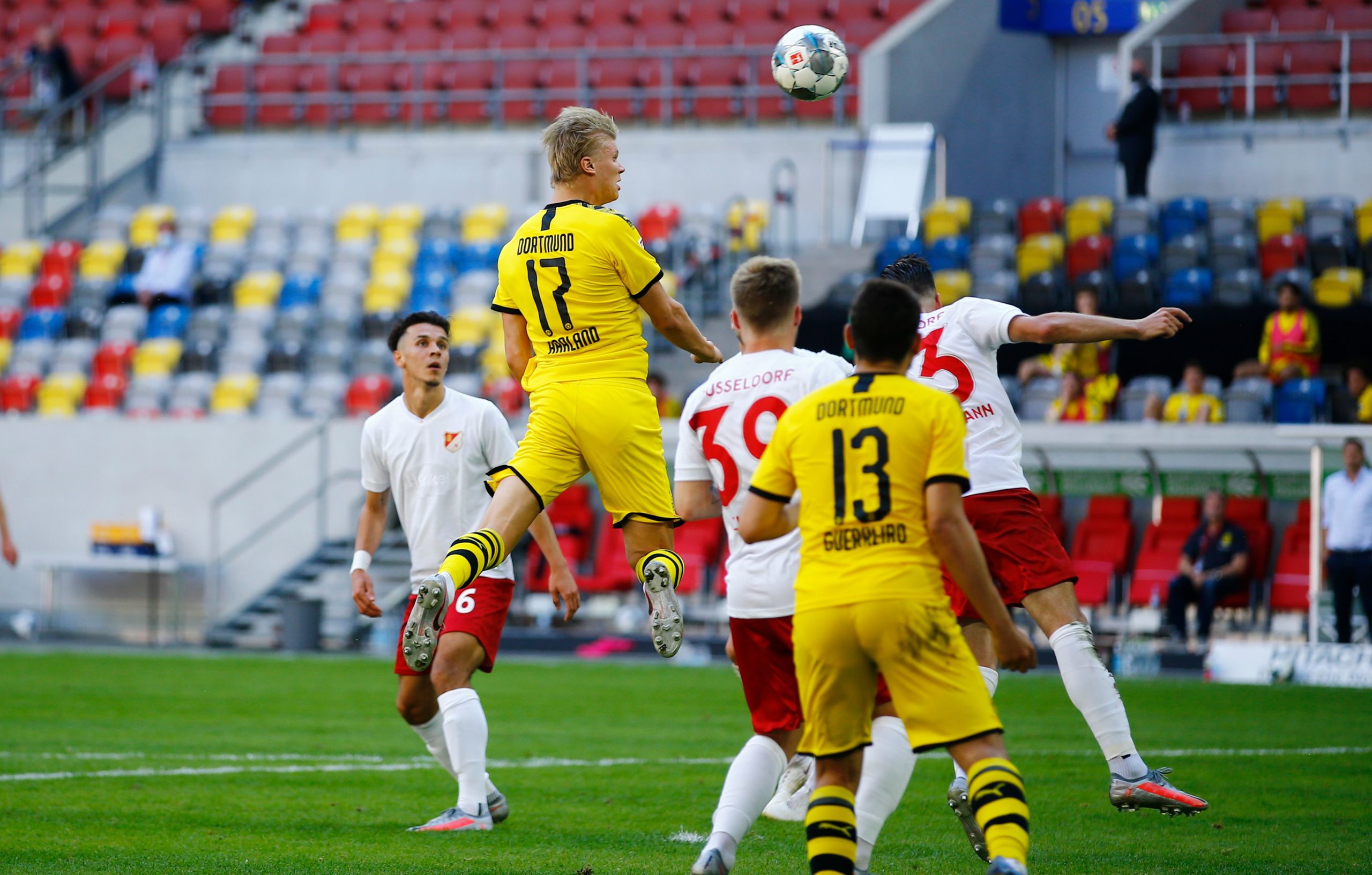 Dortmund saw a lot of the ball in the first exchanges, and they had their biggest chance in the 17th minute, when Sancho played Hakimi through on goal after a counterattack, but the Moroccan international failed to score.

Neither goalkeeper was given any cause for concern for the rest of the half, so it was 0-0 at the break.

Düsseldorf were better in the second half, but they thought that were behind in the 64th minute, when the ball went up off Guerreiro’s arm (shoulder), and the Portuguese smashed it home. However, VAR ruled it out for handball.

Skrzybski came very close in the 81st minute, when he hit the post, but it bounced out.

In the 90th minute, he hit the post again, but yet again, it went out.

So it ended 0-1 to Dortmund, much to Fortuna’s dismay.

Düsseldorf were set up very well, as they were compact and tried to make good use of the ball.

Dortmund, as always, were very attacking. And as usual, their front three was very fluid. However, they lacked incision today.

Florian Kastenmeier – Made a massive save early on, and didn’t have too much to do thereafter. 7

Kaan Ayhan – Good at the back, and forayed forward a few times too. 7

André Hoffmann – Strong at the back, as he made a couple of crucial challenges. 7.25

Markus Suttner – Made a mistake before Hakimi’s chance, but was solid in defence overall, as he kept the Dortmund forwards away from his goal. 6.5

Gerd Zimmermann – Good on the right side, but his crosses were rather disappointing. 6.25

Kevin Stöger – Battled very hard in holding midfield, as he broke down a lot of Dortmund attacks. 7

Marcel Sobottka – Decent in midfield, but he failed to have a massive impact. 5.5

Valon Berisha – Failed to make too much happen in midfield. 4.75

Niko Gießelmann – Good down the left, as he kept Sancho quiet. 6

Kenan Karaman – Saw a bit of the ball, and worked hard up front to earn the odd set-piece for his side. 6.5

Erik Thommy – Received the ball often, and kept it very well. Gave Piszczek one or two things to worry about. 6.75

Steven Skrzybski – Really unlucky after he came on. Worked very hard, and hit the post twice, but failed to find the net. 7.5

Team – Fortuna were brilliant, as they kept Dortmund at bay and even got more shots on target. They were extremely solid in defence, and looked comfortable on the ball too. Arguably deserved more than just the point. The only thing lacking was a goal. An extremely unlucky loss for them. 7.25

Roman Bürki – Had no work in the first half, and made a couple of saves in the second. Wasn’t too threatened though. 6.75

Łukasz Piszczek – Strong in defence, as he kept Thommy in check. 6.5

Mats Hummels – A rock solid performance from the German veteran, as he kept Fortuna’s forwards quiet for most of the match. 7.25

Manuel Akanji – Decent at the back, but his passing was loose at times. He got the assist though. 6.5

Achraf Hakimi – Had a major chance in the first half, but his finishing let him down. Failed to make any impact thereafter. 4.5

Emre Can – Good both on and off the ball, as he drove his side forward in attack. 6.75

Axel Witsel – He had a lot of possession, and his distribution was great too. However, he lacked a penetrative edge. 6.75

Raphaël Guerreiro – Drifted inside often, and that was almost rewarded, when he thought he had a goal when he thumped a volley into the net, but it was ruled out by the Video Assistant Referee. 6.75

Julian Brandt – Was a bit loose up front. Switched to midfield after Witsel was withdrawn, but failed to have an impact there. 5

Jadon Sancho – Very lively as always. He was all over the pitch in the attacking third, and he lit up the match with his flicks and incisive passes early on, but failed to make too much happen thereafter. 5.5

Thorgan Hazard – Failed to make any impact on the match, and he saw very little of the ball. 4.25

Erling Braut Håland – Was crowded out by the Fortuna defenders after he came on, but got the crucial winning goal. 7

Giovanni Reyna – Tried very hard to make things happen, but failed to do so. 5.5

Team – Dortmund did not look good for most of the match, and were even saved by the post twice. They failed to trouble Fortuna’s defence for 94 minutes, and should count themselves very lucky to take 3 points out of this match. They have a lot to work on. 6

Sascha Stegemann had a relatively easy first half, but things started to get difficult in the second. Guerreiro’s goal was ruled out for handball by VAR, but there will certainly be many debaters after that decision. 6.5

Fortuna stay 16th, and Bremen’s win means that they are level on points with Die Grün-Weißen, and only out of the immediate drop zone thanks to a solitary goal. Their luck is certainly miserable.

As for Dortmund, the three undeserved points close the gap to Bayern to 4 points until the Champions play, and also give them a 4 point cushion over Leipzig. They can seal a Champions League spot if Bayern beat Gladbach later on.