Werder welcomed Frankfurt, in search of three points that would propel them out of the immediate drop zone in the Bundesliga table. 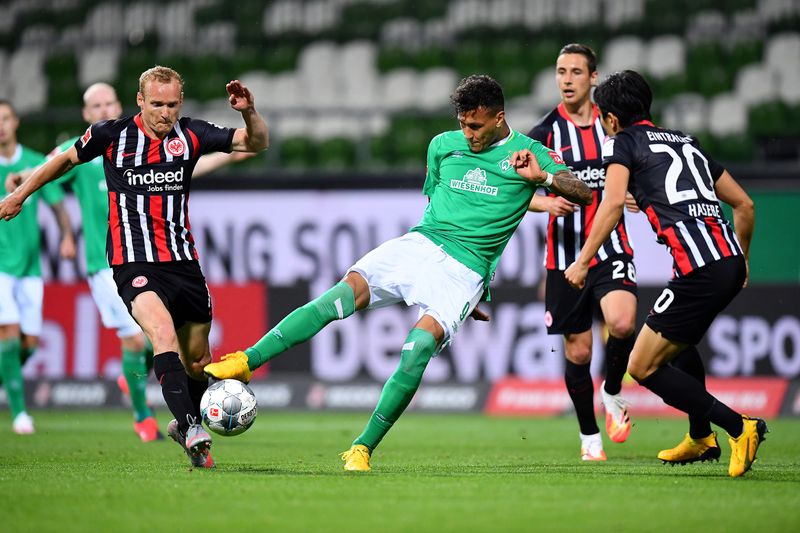 But in the 36th minute, Bremen thought that they had won a penalty as Abraham’s hand hit the ball in the box. However, Klaassen was adjudged to be offside, and no penalty was given.

The second half was slightly more open, and Kohr thought that he had scored in the 58th minute, but he was marginally offside.

However, 3 minutes later, Silva headed Frankfurt ahead, after Kostić served him up on a plate with a brilliant cross.

Frankfurt were better thereafter, and they were able to double their advantage when Dost flicked a corner on for Ilsanker, who scored with his first touch.

In fact, he was able to bag a brace in the 90th minute, when he headed a free-kick home.

Both sides set out to prevent a goal, and not to score one. So both sat deep, and were very hesitant to go forward, in fear of a counterattack. Bremen’s breaks, however, failed to yield much, as their attackers were outpaced by the Frankfurt defenders.

After opening the scoring, Frankfurt were far more bold, and managed to dominate the match.

Jiří Pavlenka – Made a few good saves, and didn’t do much wrong to concede three goals. 6.5.

Miloš Veljković – Not bad at the back for most of the match, but should have done better to prevent the first two goals. 6.

Kevin Vogt – Decent in defence, but should have done better to prevent the first goal. 6.

Niklas Moisander – Didn’t do much wrong at the back, but failed to do much right either. 5.5.

Maximilian Eggestein – He battled in midfield, as he tried to string his side’s attacks together. 6.5.

Davy Klaassen – He was very lively up front, as he tried to make things happen. 6.75.

Marco Friedl – Did alright to contain Touré, but couldn’t do anything in attack. His set-piece deliveries were sub-par as well. 5.75.

Yuya Osako – Decent down the left, as he ran up and down the flank. But he failed to create much up front. 6.

Davie Selke – Played on the shoulder of the last defender, and went through a couple of times as well, but his pace let him down. 6.25.

Fin Bartels – Couldn’t do much to affect the game, bar the chance he had late in the first half. 5.25.

Josh Sargent – Failed to affect the game after coming on. 5.

Team – Bremen were the marginally the better side in the first half, but they waned in the second. They failed to create a major chance, and their vulnerability from set-pieces is what cost them in the end. 6.

Kevin Trapp – Made the saves when he had to, and didn’t do much wrong. 7.

David Abraham – Decent at the back, but he almost conceded a penalty in the first half. 5.75.

Makoto Hasebe – Strong at the back, as he made lots of important challenges. 7.

Martin Hinteregger – Battled hard in defence, as he nullified any aerial threats. 6.75.

Almamy Touré – Good down the right flank, as he kept the Bremen wingers at bay. But he couldn’t do much in attack. 6.25.

Dominik Kohr – Lively in midfield, as he appeared late on the edge of the box for his side’s attacks. 6.5.

Sebastian Rode – Good in holding midfield, as he kept Bremen from breaking away. 6.5.

Filip Kostić – Subdued for most of the match, but he did well to set up Silva’s goal with what effectively was his first cross. He was very industrious as always, though. 7.25.

Daichi Kamada – Not very threatening in attack, but he was alright. 5.5.

Mijat Gaćinović – Threatening in attack, and he caused problems with his dancing feet. 6.75.

André Silva – Worked hard up in attack, and got the all-important opener. 7.

Stefan Ilsanker – Definition of a super-sub, as he scored with his first touch, and later on in the 90th minute with his header. 7.25.

Bas Dost – Had the desired effect after he came on, as he was able to trouble the Bremen defence in set-pieces. Got an assist after the flick-on too. 6.75.

Jonathan de Guzmán – Got an assist through a free-kick only two minutes after coming on. His set-piece deliveries were good too. 6.5.

Team – The Eagles didn’t make any mistakes in the match, and even though three goals may be slightly flattering, they certainly deserved the win, mainly due to their second half performance. Looks like their relegation worries may well be put to bed now. 6.75.

Patrick Ittrich got every single call right in this match. 8.5.

Adi Hütter – Frankfurt;s head coach was seemingly using a crystal ball to make his substitutions, as Ilsanker bagged a brace, assisted by Dost and de Guzmán. 7.75.

Werder stay 17th, and their good run of points comes to an end. They are in the midst of a relegation battle, and will need good results to avoid the drop.

Eintracht jump up to 11th in the Bundesliga, and any relegation scares that they have may well be dead and buried now. They probably won’t go too far up either, so expect them to finish this season in mid-table.