Bayern welcomed Frankfurt to the Allianz Arena for the second semifinal of the DFB Pokal, to decide who would face Leverkusen in the final. Both sides were sporting special kits – Bayern in their new home strip for 2020/21, and Frankfurt in a Special Edition #BlackLivesMatter kit. 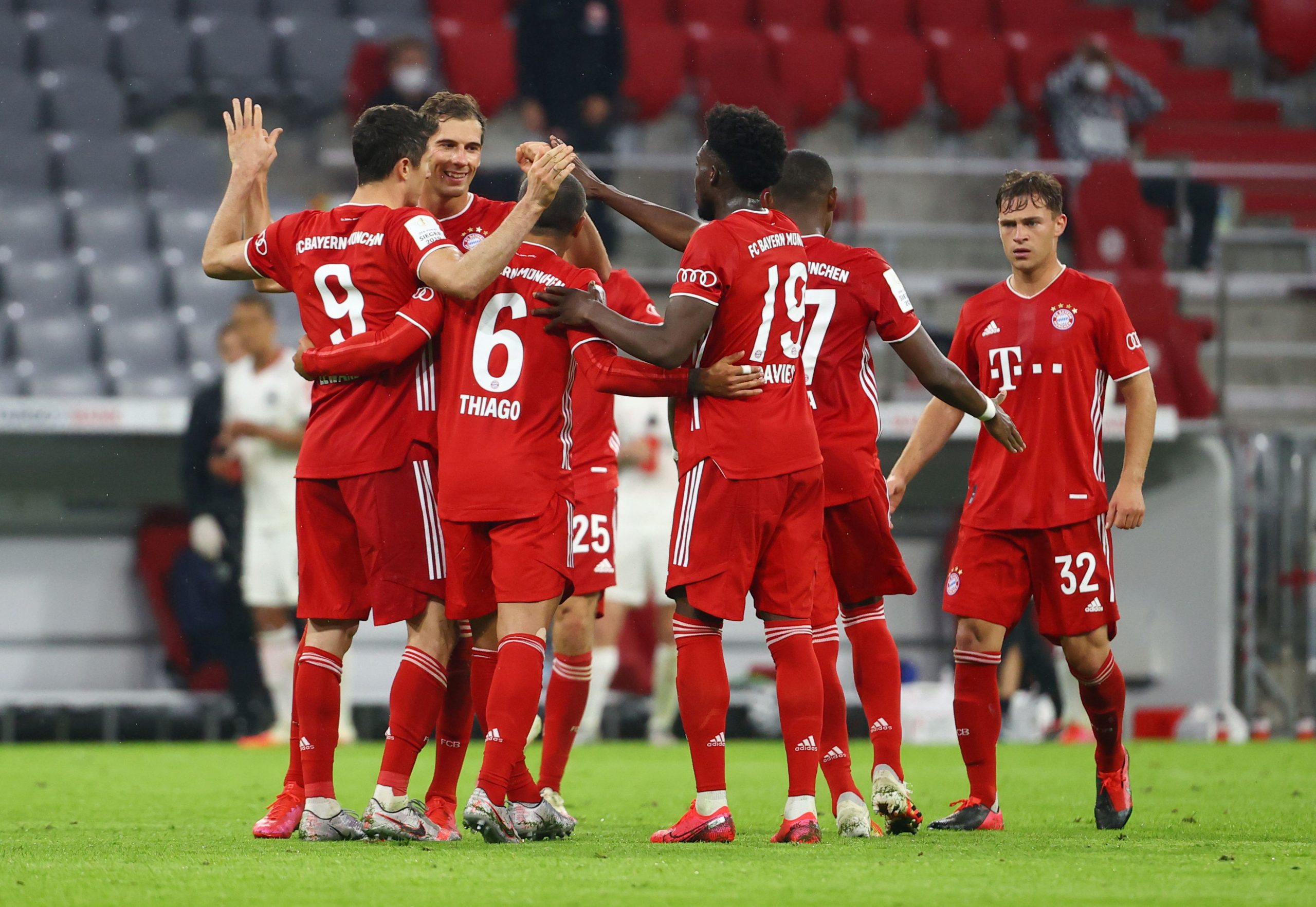 Bayern dominated from the start, and created chance after chance. They got their reward in the 14th minute, when Perišić headed Müller’s cross in.

They, and Coman in particular, should have scored at least a couple of more goals in the first half, but it was only 1-0 at the break.

Frankfurt looked far better after the break, and they were back level in the 69th minute, when da Costa turned Kamada’s cross in with a powerful finish.

But only 5 minutes later, Davies squared one for Kimmich, who knocked it on to Lewandowski, who guided it home.

Frankfurt continued to threaten thereafter, but couldn’t create a chance, and it ended 2-1 to the defending Champions.

Frankfurt were in a major dilemma because of how Bayern played.

They sat behind for a lot of the game, and were under constant pressure. Whenever they tried to relieve it by going forward, they got hit on the counter – for example just before the opener.

They really couldn’t do anything to stop the Bayern juggernaut.

Davies & Perišić vs Touré & Abraham – The Bayern duo on the left flank stretched Frankfurt’s backline. Davies and Perišić put Touré in all sorts of poor positions, which forced Abraham to come in support, but this led to spaces being opened centrally.

Manuel Neuer – Didn’t have too many saves to make, but couldn’t stop the goal either. 6.

Benjamin Pavard – Decent down the right flank, where he forayed forward pretty often too. 6.5.

David Alaba – Another strong showing from him. He defended well, and his distribution was great as always. 7.

Alphonso Davies – Another great performance from the Canadian. Did very well at left-back for the first hour of the match, and looked decent as a left-winger for the rest of it too. 7.5.

Joshua Kimmich – Another battling performance from him in midfield, as he screened his defence. Got an important assist for Lewandowski’s goal too. 7.75.

Leon Goretzka – Great display from him in the middle of the park, as he strung his side’s attacks together. 7.25.

Kingsley Coman – He was lively down the right, and had a couple of great chances as well, but he couldn’t take them. 6.25.

Thomas Müller – Showed his versatility today, as played as a number 10 and as a right winger. Helped out a lot in defence too. And of course, he got yet another assist. 7.5.

Ivan Perišić – Great game for him. Not only did he get a goal, but he was also very lively down the left flank, as he made lots of runs to the byline, and put in dangerous crosses. He also cut inside to support attacks down the middle. This performance justified Bayern’s interest to sign him permanently. 7.75.

Robert Lewandowski – I mean, he just keeps scoring so anything less than a goal is not acceptable from him. But he got a goal here, and worked hard off the ball too. 7.

Thiago Alcântara – Good in midfield as he always is, but gave away the ball at times. 6.

Lucas Hernandez – Didn’t really look too comfortable at left-back, and should have done better to prevent the equaliser. 4.5.

Team – Bayern looked very strong for most of the match. Even when Frankfurt seemed better, they didn’t allow any real sight of goal. Meanwhile, they created an array of chances for themselves, but they failed to convert a lot of them. But they were the better side, and deserved to win. 7.

Kevin Trapp – Wasn’t tested too often, and didn’t really have any massive saves to make. 5.75.

Almamy Touré – Not a great match for him, as he was tormented by Perišić. 4.5.

David Abraham – Decent at the back, as he prevented the Bayern wingers from overrunning his right flank. 6.

Martin Hinteregger – Solid at the back, as he made a lot of important challenges. Was very strong aerially too. 7.

Evan N’Dicka – Good on the left side, as he contained Coman and Pavard, while also supporting Chandler in attacks. 6.75.

Stefan Ilsanker – Helped in defence, as he kept Coman in check. 6.25.

Sebastian Rode – Looked good in the first half, as he spurred his side on in transition. However, his influence waned in the second. 5.5.

Dominik Kohr – A very industrious performance from him, as he battled very hard in midfield. 6.75.

Timothy Chandler – Looked lively down the left, as he kept Pavard honest. But, he failed to create anything substantial. 6.5.

Mijat Gaćinović – Helped his side in transition, but his passing was loose at times. 4.5.

André Silva – Worked very hard up front, but didn’t get any good supply. Made the most of whatever he had, though. 6.25.

Danny da Costa – Made an immediate impact by scoring after coming on. Good thereafter too. 7.

Daichi Kamada – Looked very lively after coming on, and did well to create the equaliser. 6.5.

–
Team – Frankfurt were completely dominated in the first half, and were lucky to be only one goal down at half-time. But they turned it around in the second, keeping Bayern in their own half, and even equalising. After going behind again, they continued to threaten, but failed to make a good chance. Overall, not a bad showing from them. 6.5.

Marco Fritz had a relatively easy day at the office, and he got most of his decisions right. 7.