Wolfsburg hosted the Champions, Bayern Munich on the last matchday of the 2019/20 season, looking to secure a Europa League spot. 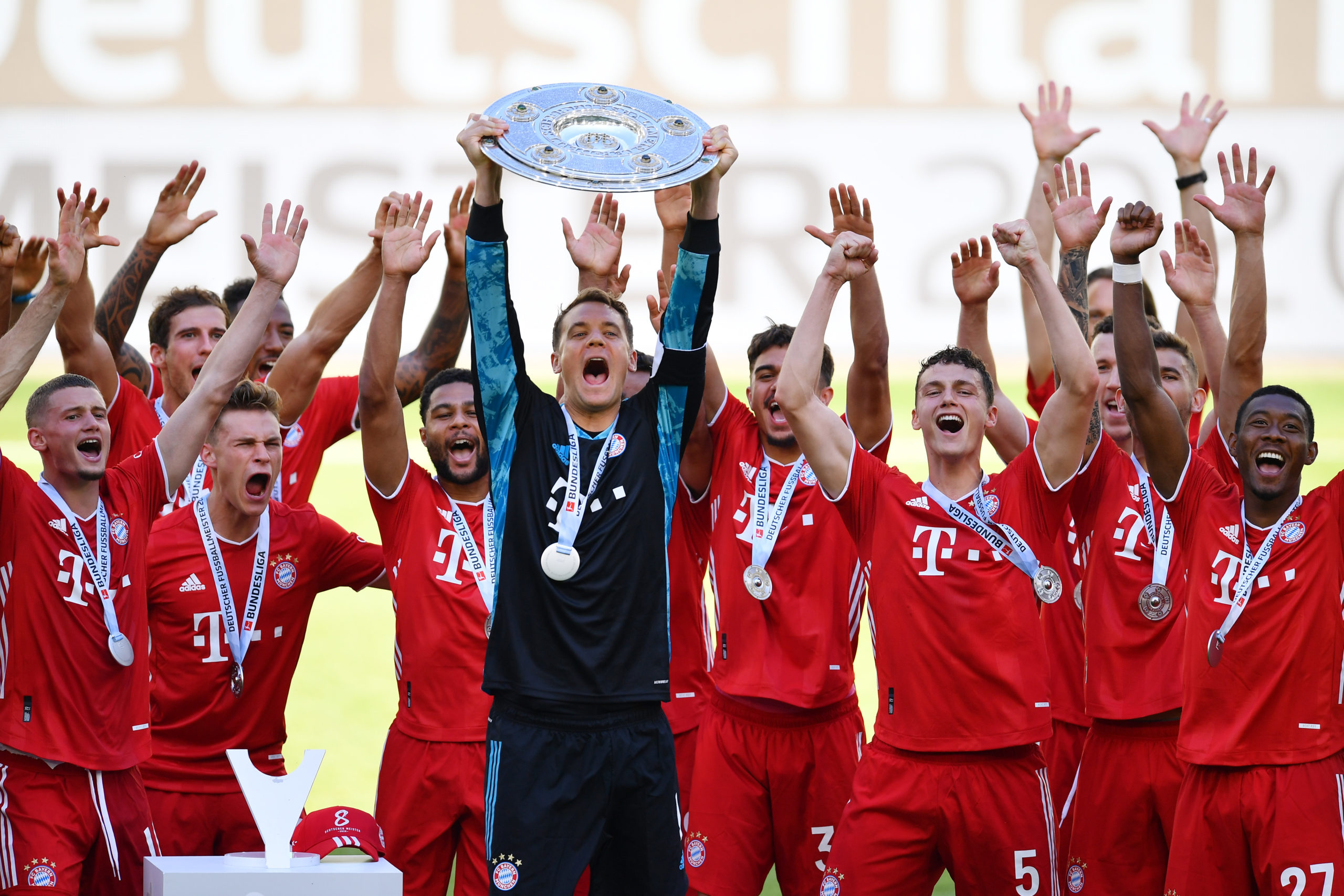 Though Wolfsburg started well, they found themselves behind in the 4th minute after a Bayern counter. Müller played Coman through on goal, and the Frenchman beat the keeper to give his side the lead.

Wolfsburg had a big chance in the 18th minute, when Roussillon cut the ball back for Brekalo, The 28 year-old unleashed a powerful strike, but Neuer made a great save.

3 minutes later, Gnabry and Müller played a 1-2, allowing the former Arsenal man to let fly. The shot was destined for the bottom corner, but Casteels tipped it wide.

A couple of minutes after that, Gnabry tested the Belgian keeper once again, and the 28 year-old answered.

At the half-hour mark, Gnabry’s ball across the box found Coman, who missed an open goal.

Then, at the other end, Mbabu found Ginczek with a great cross, but the striker’s volley went wide of the target.

In the 33rd minute, Goretzka’s chipped ball found Müller, whose header lobbed over the top of the net.

3 minutes later, Odriozola’s cross gave Lewandowski a free chance from 7 yards out, but he headed straight at Casteels.

But only a minute later, Cuisance unleashed a curling shot into the top corner from 25 yards out, and Casteels stood no chance.

Gnabry was played through in the 42nd minute, and he tried to guide it over the rushing Casteels. The ball seemed to hit his hand, but VAR saw nothing wrong with it.

Wolfsburg thought that they had scored in the last minute of the half when Odriozola turned Mbabu’s cross into his own net, but the referee thought that Ginczek pushed the Madrid-loanee, and VAR confirmed that he was right.

2 minutes after the break, the Wolves had a free-kick in a promising area, but Arnold’s attempt didn’t cause too many troubles for Neuer.

At the other end, Gnabry had a great chance from about 10 yards out, but he skied it.

The German was in a very promising position in the 56th minute, but Casteels kept his shot out.

3 minutes later, Ginczek got a shot away after getting past Alaba, but his shot went straight into the arms of Neuer.

Lewandowski thought that he’d scored in the 64th minute after he tapped Pavard’s cross in, but the assistant ruled it out for offside in the build-up.

Bayern won a penalty in the 71st minute after Guilavogui brough Cuisnace down, and a penalty was awarded. The Wolfsburg captain was sent off with a second yellow too. Lewandowski took the penalty, and obviously converted it.

In the 79th minute, Müller was at the end of Perišić’s cross, and he thumped his volley home.

Nothing much happened thereafter, and so it ended 0-4 to the Champions.

Wolfsburg pressed very very high initially, and didn’t allow Bayern to keep the ball in their own third. They even pushed their midfielders all the way up. But after going a goal down, they went into damage-limitation mode.

Bayern were unfazed by this, though. They looked to pass their through the press, and deliver incisive through balls in the final third.

Koen Casteels – Made quite a few good saves, but was rather lucky to stay on the pitch. 6.5

Kevin Mbabu – Wolfsburg’s best player in terms of creating chances, as he tormented Davies down the right. His crossing was good too, but his forwards failed to deliver a finish. 7

Marin Pongračić – Made a few good interventions at the back, but failed to stop the goals. 5

Jérôme Roussillon – Didn’t manage to stop Bayern from the right, as he was beaten for pace. 4.5

Renato Steffen – Not great down the right, as he was contained by Davies, and his passing was loose. 4.75

Josuha Guilavogui – Not great in midfield, and he capped it off by getting sent off. 3

Maximilian Arnold – Tried to make things happen at both ends, but didn’t really manage to do so. Worked hard, though. 6

Josip Brekalo – Not an ideal match, as he too was loose out wide, and failed to stop Odriozola. 4.5

Daniel Ginczek – Had a couple of decent chances, but failed to take them. Had very little to do overall. 4.75

Wout Weghorst – Worked hard to create chances up front, but didn’t really get them. 5.75

João Victor – Had very little impact after coming on. 4.5

Omar Marmoush – The youngster didn’t really impress off the bench. 4.25

Team – Wolfsburg looked good early on, but not so much after conceding. Even though they tried to draw back level, their finishing was almost non-existent. After going 2 down, they started to look very poor, and deservedly got thrashed. Not a good way to end the campaign. 4.5

Manuel Neuer – Made a few good saves early on, but had little to do thereafter. 6.5

Álvaro Odriozola – Decent down the right, as he went forward often and created one or two decent chances. Will Bayern or Madrid keep him? No. 6.25

Jérôme Boateng – Strong in defence, but he had very little to do. 6.75

David Alaba – Solid at the back, and his distribution was good as well. 6.5

Alphonso Davies – Absolutely outstanding down the left, as he did very well to keep Mbabu and Steffen in check. 7.5

Leon Goretzka – Great in midfield, as he dominated the middle of the park. 7

Serge Gnabry – Very lively out wide, as he had numerous presentable chances, but failed to make them count. 6.5

Thomas Müller – The assist king got yet another one to take his tally to a record-breaking 21. He also scored an absolute belter. 8.25

Kingsley Coman – Took the first chance brilliantly, but missed an absolute sitter later on. On paper, he got the assist for the second too, but he was rather wasteful at times. 6.75

Robert Lewandowski – The Bundesliga Player of the Season saw few chances, but he capped off his Torjägerkanone as he converted a penalty. 6.75

Benjamin Pavard – Created a couple of decent chances from the right, but had little to do in terms of defence. 5.75

Philippe Coutinho – Didn’t really have a great impact after coming on, but he was decent in midfield. 5.5

Team – Bayern were not overly clinical – they could have had 6 or 7, but even then they were utterly dominant. They destroyed Wolfsburg in the second half, and they seemed to play through them as if they were against Under-19s. Brilliant stuff from the champions. 7.5

Patrick Ittrich got almost all all his calls right, but there is no way that Casteels should have stayed on the pitch. 6

Robin Knoche – The 28 year-old played out his last Wolfsburg match here. A rather disappointing end to his long stint, but the Wolfsburg fans will fondly remember his 15 years at the club.

Wolfsburg drop down to 7th due to Hoffenheim’s 4-goal win in Dortmund. This means that they’ll have to go through qualification rounds if they want to play in the Europa League next year.

Bayern take their league tally to 100 goals, and cap off a brilliant season with a great win.