Hoffenheim hosted Leipzig at the PreZero Arena, with both sides in search of 3 points to boost their European ambitions. 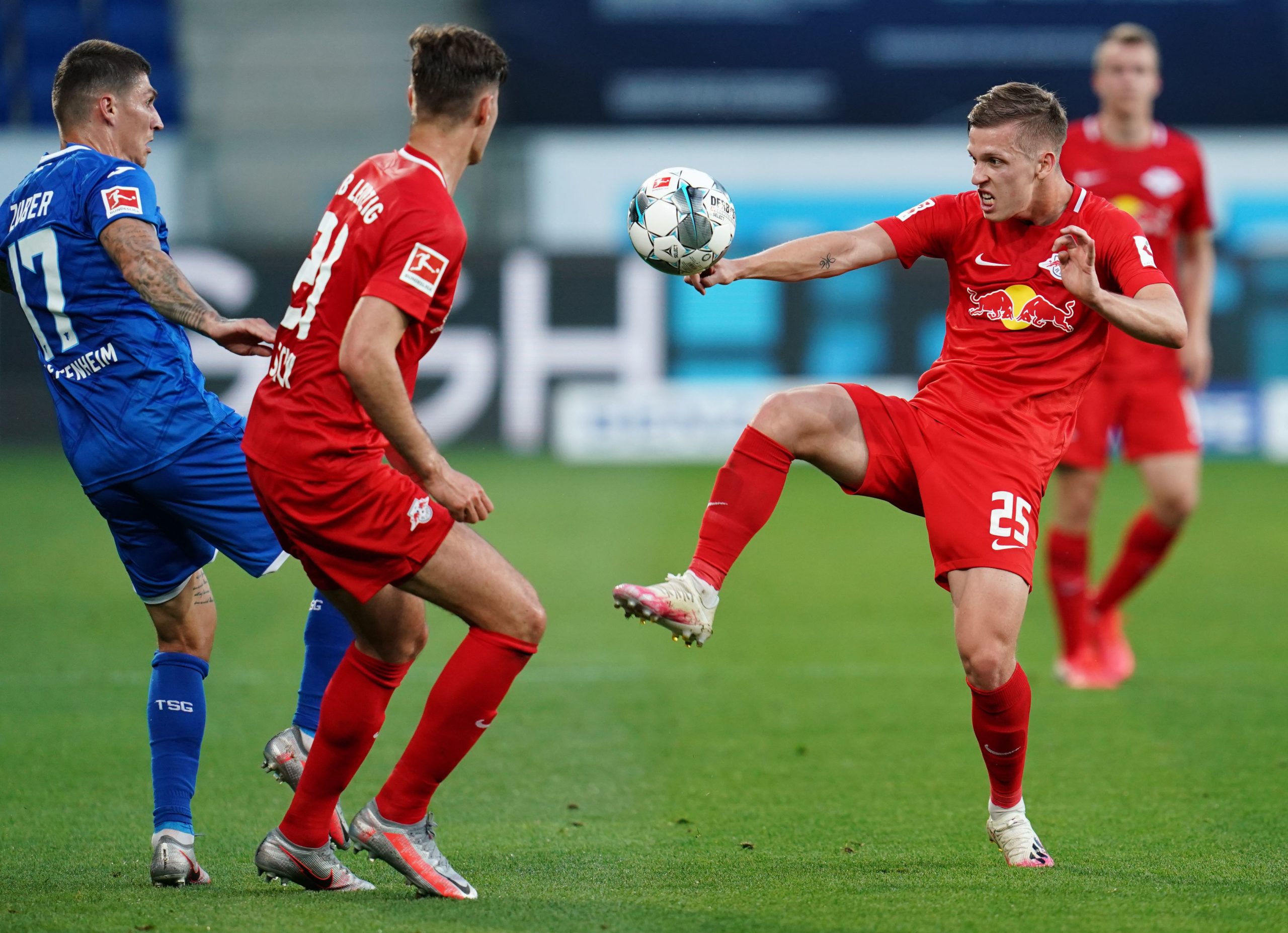 Hoffenheim’s start under new management was very promising, as they created a couple of massive chances. They were even denied a penalty due to a minor handball, and they failed to take their chances.

They were made to pay almost (Olmo-st, I should say) immediately, when Dani Olmo burst into their box, and poked it into the net.

2 minutes later, Olmo was at it again. Sabitzer headed a ball down for Olmo, who smashed it past Baumann.

Both sides had good chances after that, and Hoffenheim came closest to scoring, when Dabour’s header came off the bar.

Just a minute before half-time, Werner went through on goal, but he fluffed his lines to keep it at 0-2.

Hoffenheim were the better side after the break too, but they failed to make any chances count.

Towards the end, Leipzig had 3 major chances, but Baumann kept them out. Therefore,the match ended 0-2 to the visitors.

Hoffenheim were set up to press high, and prevent Leipzig from playing out from the back. This worked a treat early on, as they had a couple of major chances.

But after Leipzig broke through, Hoffenheim looked to limit the damage, and they stopped the intense pressing.

Oliver Baumann – Made a few good saves, but couldn’t prevent the goals. 7

Stefan Posch – Decent at the back, and he also went forward in attack at times. 6.25

Florian Grillitsch – Solid in defence, as he kept Werner quiet.6.75

Ermin Bičakčić – Strong at the back, and he drove forward often too. 6.5

Pavel Kadeřábek – Very good down the right flank, as he kept the Leipzig wingers at bay. Went forward very often too, and threatened with his crosses. 7

Sebastian Rudy – Failed to have a major impact on the match. 5.25

Diadie Samassékou – Battled hard in midfield, as he made a lot of challenges. Also had a couple of chances from the edge of the box. Did well to keep Laimer in check. 7

Dennis Geiger – Worked hard in midfield to drive his side forward, but failed to do anything in front of goal. 6.5

Steven Zuber – Decent in midfield, as he popped up with late runs in his side’s attacks. 6.5

Moanes Dabour – Looked very lively early on, when he had a couple of major chances and almost won a penalty. He hit the crossbar as well, so the only thing lacking from this performance was a goal. 6.75

Christoph Baumgartner – Was very lively in attacking midfield. He threatened the Leipzig goal a couple of times, and worked hard both on and off the ball. 7

Andrej Kramarić – Couldn’t do too much after coming on. 5.5

Robert Skov – Very threatening down either flank after he came on. 7

Ihlas Bebou – Was kept quiet after he was brought on. 5

Jacob Bruun Larsen – Not too bad after coming on, but he failed to make too much happen. 5.75

Team – Under new management, Hoffenheim looked very good. They were the better side for most of the match, and created a lot of chances. They kept the Leipzig forwards quiet too. The only thing that cost them was their failure to score. However, there are a lot of promising signs for them to take away from this match. 7

Péter Gulácsi – Did well to earn the clean sheet, as he made a few important saves. 7.5

Nordi Mukiele – Battled hard on the right flank to prevent the Hoffenheim wingers from getting too much space. 7.25

Lukas Klostermann – Good at the back, as he earned his side a clean sheet. 7

Marcel Halstenberg – Did well in defence, as he supported Angeliño down the left. 7

Angeliño – Was kept very quiet in way of attack, but did his defensive duties well. 6.75

Marcel Sabitzer – He was alright in midfield, but he failed to create much in attack. Got an assist for Olmo’s second though. 6.25

Konrad Laimer – Good in the middle of the park, as he worked hard to set his side’s attacks up. 6.75

Kevin Kampl – Battled hard in holding midfield to keep Hoffenheim from running through his side. 7

Dani Olmo – Great performance from the Spaniard. He had two chances and scored two goals. He was decent at holding up the ball too. However, after the goals, his influence waned. 7.5

Patrik Schick – Had a couple of decent chances, but failed to create a major impact. 5.75

Timo Werner – Uncharacteristic performance from the German striker. He was kept quiet, but he managed to get three or four good chances. However, his finishing was surprisingly poor, and his decision making was not great either. 4

Subs:
Christopher Nkunku – Looked very threatening after he was brought on. He came very close to scoring when he rattled the woodwork, and he tormented Hoffenheim’s defence a lot. 7.25

Tyler Adams – Did well in midfield after he was subbed on. 6.5

Ademola Lookman – Worked hard after coming on, as he helped his side in transition. 6.75

Team – Leipzig were not great on this occasion, and let off by Hoffenheim’s failure to take chances. They took their two chances early on though, and held on after that. They have lots of room for improvement, but Julian Nagelsmann will be happy with the result, as he takes 3 points away from his former employers. 6.5

Tobias Welz had some tough calls to make early on, but he got them right. He was very involved in the match, as he even played a couple of one-twos, much to Laimer’s dismay. 7

Hoffenheim’s Three Head Coaches – After Alfred Schreuder got the sack, Matthias Kaltenbach was the main man on the sidelines – backed up by Marcel Rapp and Kai Herdling. Their plans were not bad, as Hoffenheim were the better side. But in the end, their failure to score cost them.

Hoffenheim stay 7th in the Bundesliga table, but Freiburg can overtake them if they win their match.

Leipzig also stay 3rd, but they are only one point away from Dortmund, and 6 clear of Gladbach who are in 4th place.